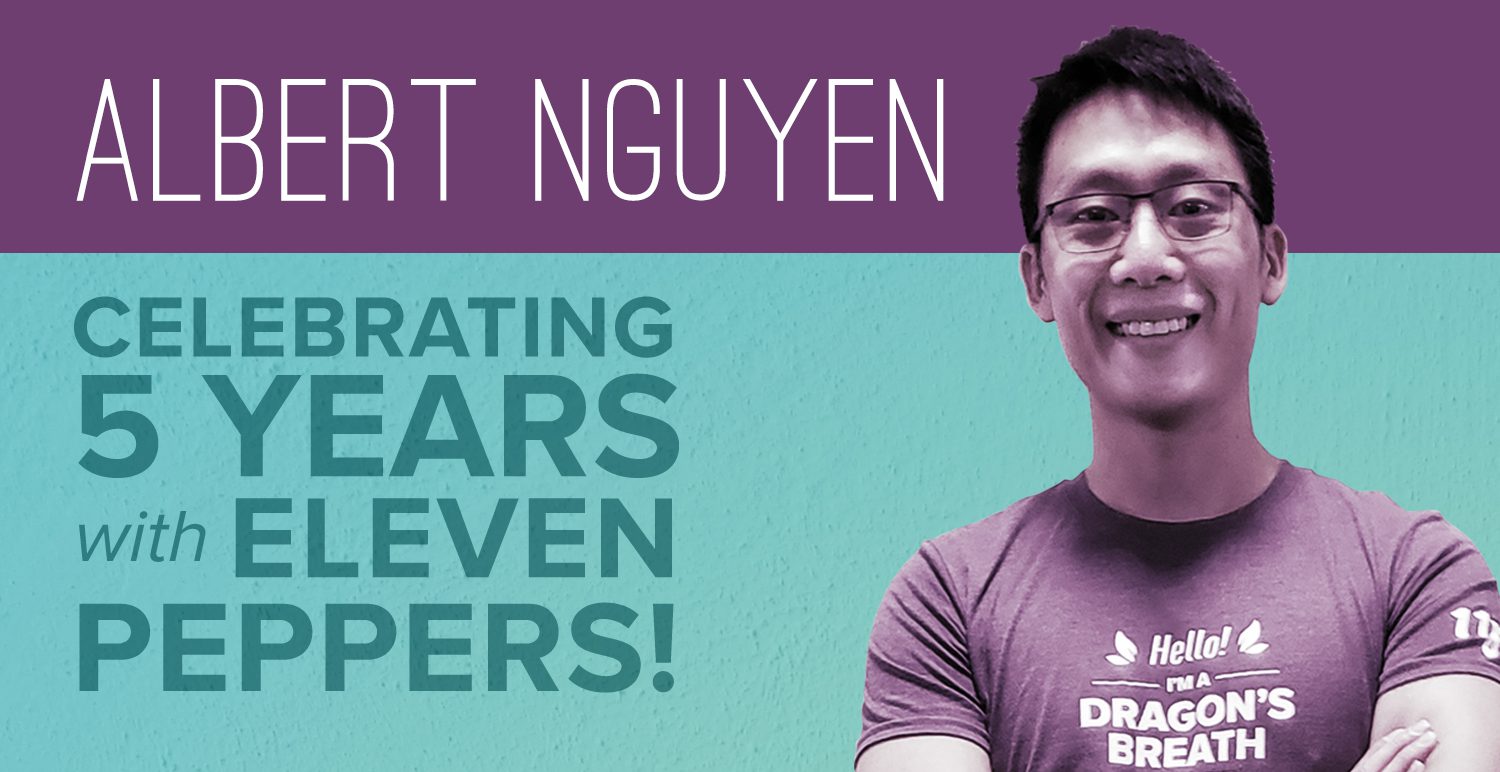 Albert is one of our Senior Software Engineer’s. He has worked on many different projects during his time as a Pepper, but no matter what he is working on, his commitment to continuing to hone his craft is inspiring to others.

To keep his mind sharp, Albert loves a good cup of coffee. And we’re not talking about any ole regular cup of joe. He brews the gourmet stuff, and is the most popular destination for his coworkers looking for a caffeine jolt.

To learn more about Albert, keep scrolling to read our special interview and infographic!

2. If you were a pepper, what type would you be and why?
I’d be a Dragon’s Breath Pepper. It’s got a little bit of kick at 2.48 million Scoville units.

3. What is a favorite 11P event?
Free Food Fundays! Though the trips, holiday parties, brown bags, happy hours, game days, picnics, and other events are pretty fun too!

4. What is your favorite Christmas present ever received from 11P?
The De’Longhi super automatic espresso machine! Between me and Kathy, it gets used every day.

5. What is your favorite 11P memory?
There’s so many of them! Disney is probably my favorite though. It was so fun hanging out with everyone. The time a bunch of Peppers went skiing at Big Sky was pretty memorable too!

6. Name a Pepper you can always lean on for support or advice:
There are so many Peppers I’ve leaned on in the past including Theresa, Jesse, Jill, and Paul. Now it tends to be Gary for all the UX stuff we’re working on. I also lean on all the Peppers in PepperChat on Slack, for all sorts of things.

7. Name a Pepper whose work or work ethic inspires you:
Pretty much every Pepper has a great work ethic. Besides Kristen and Bryan, I’d say Paul. After a day of work, he would go home and code even more just for fun.

Complete wimp
Will proceed with caution
A subtle flame
A little sweat never hurt
The spicier, the better!
Getting to know Albert a little better...

1. What is your favorite thing to do with your wife Kathy?
Doing anything with Kathy is fun, but my favorite is probably just going to a café like Peet’s and drinking a good latte while munching on pastries while chatting and people watching.

2. What’s your signature dish to cook?
I don’t really have a single signature dish. I pretty much just make a ton of chicken dishes in different sorts of ways. I’d marinate or season the chicken overnight and toss it into an Instant Pot, sous vide, grill, pan, or oven to cook it. It comes out juicy and delicious while still being healthy. I seem to have tricked Kathy into thinking I’m a master griller, so we’d grill a lot when the weather is nice.

4. Do you prefer board games or video games?
I like both, but prefer video games. I’ve been on a Tetris kick recently and trying to practice the DT Cannon. Who would have known that Tetris could get so complicated. My favorites are couch co-ops like Super Smash Bros and Mario Kart. I used to play a lot more games back in the day like Assassin’s Creed, Final Fantasy, and Starcraft.

5. Any secret hobbies or talents?
Well, they wouldn’t be secret anymore if I revealed them. =P
I guess I can reveal a few like me being a second degree black belt, eagle scout, snowboarder. I also used to ride a motorcycle back in the day.

6. What’s the latest fitness craze you have tried?
I haven’t tried any of the latest ones, but I’ve been doing intermittent fasting for a few years now.

7. If you could be a sci-fi or fantasy character, who would you be?
This is a hard question since there’s so many to choose from! Knowing me, I’ll randomly think about this question a few days later and think of another character. Off the top of my head, I’ll say Hawkeye from the Marvel Cinematic Universe. He’s a regular guy that can hold his own among others with superpowers or advanced technology. He also seems like a cool dad.

8. How fast can you run a mile?
I haven’t been training since my wife dragged me into doing the 2017 Baltimore Marathon. My mile time now is probably around 7 minutes because I still keep up with HIIT workouts.

9. As a Tesla car owner, what feature do you get a kick out of?
I pretty much experimented with all of the features. I even use third party apps to track my efficiency because that feature wasn’t included with the official app. I was also playing with the idea of making a web application that would use the unofficial Tesla API to get the stats that aren’t normally visible. The fast acceleration, autopilot, and gas savings are my favorite features. The games are pretty fun to play when waiting around. The built in dash cam and sentry mode are also great features.